New tougher penalties for using a mobile phone whilst driving 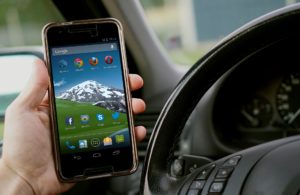 It has been illegal to use a mobile phone without hands free access whilst driving or riding a motorcycle since 2003.  Despite this, the number of people doing so has been increasing ever since.

Many people view the use of a mobile phone whilst driving as a minor offence but in Britain last year 22 people were killed and 99 seriously injured in road incidents where drivers were distracted by using a mobile phone. The Transport Research Laboratory has released data indicating that the reaction times for drivers who are texting is twice as long as those who have been drinking.

The Government has launched a campaign against what motoring organisations have called an ‘epidemic’ on the roads.  Its primary purpose is to inform through advertisements and to try to change attitudes so that it becomes culturally unacceptable to use a mobile phone whilst driving, similar to drink driving.

So What is the Law?

It is illegal to use your phone while driving or riding a motorcycle unless you have hands-free access, such as a bluetooth headset, voice command and a dashboard holder.  Even if using hands free you must stay in full control of your vehicle at all times.  The police can stop you if they think you’re not in control because you are distracted and you can be prosecuted.

You may only use a hand held phone if you are safely parked or you need to make a 999 or 112 emergency call and it is unsafe or impractical to stop.

What are the New Penalties?

Offenders will now receive 6 points and a £200 fine.  Depending on the incident, they may also be taken to court and be banned from driving and get a maximum fine of £1,000 (£2,500 if they were driving a lorry or bus).

For drivers who have passed their test in the last 2 years a single offence will result in their licence being revoked.  For more experienced drivers a second offence within 3 years may also result in a ban.

Whilst it is hoped that the advertising campaign and the new tougher penalties will reduce the accidents caused by distracted drivers using mobile phones, accidents will still occur.

Beyond the criminal penalties, anyone causing an accident as a result of driving whilst being distracted by using a mobile phone will be liable for any resultant injuries and damage.

If you have sustained injuries as a result of an accident caused by a distracted driver contact one of our personal injury solicitors for advice about what steps you can take to recover compensation.